On the way to Portsmouth to do some shopping, I kept getting a glimpse of mysterious chalk cliffs hiding away among some trees, set well back from the road.

After noticing them that first time, every time I passed them afterwards only increased my desire to get closer and explore.

So one sunny morning, we spotted somewhere to park the car and jumped at the chance. 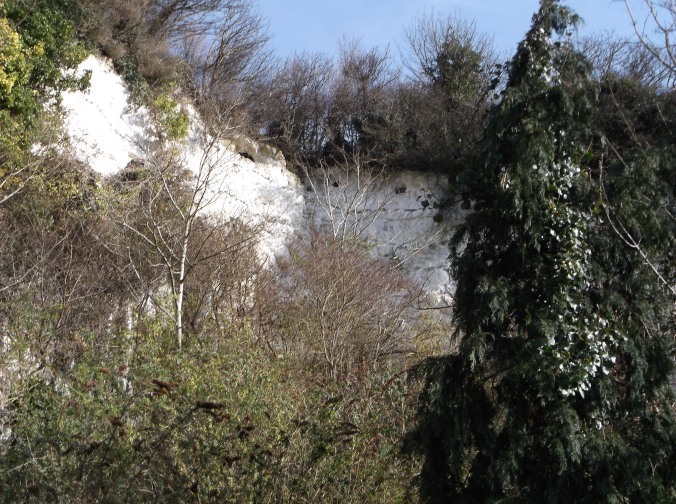 Once out of the car, we discovered a caravan park hiding behind the trees, completely hidden from the road. As we walked towards the cliff face, it was like being in another world. Strangely silent and peaceful, apart from some noisy crows arguing among themselves, high up in the tall trees.

The other worldliness increased as we walked slowly along the bottom of the chalk cliffs. They had been there all this time, soaring above us so high, brilliantly white in the sunlight. We wondered just how many other hidden treasures existed, all the places we hadn’t discovered yet.   Further along, we found what looked like boarded up old abandoned tunnel openings, and wondered who had made them and why.

We walked around for what seemed like a long time, reluctant to leave the magic behind and when we finally started to walk back to the car, we met one of the local residents. A lovely woman, who we discovered had lived there most of her life, and knew the tunnels had been used during the war as air raid shelters as she had been in there herself. 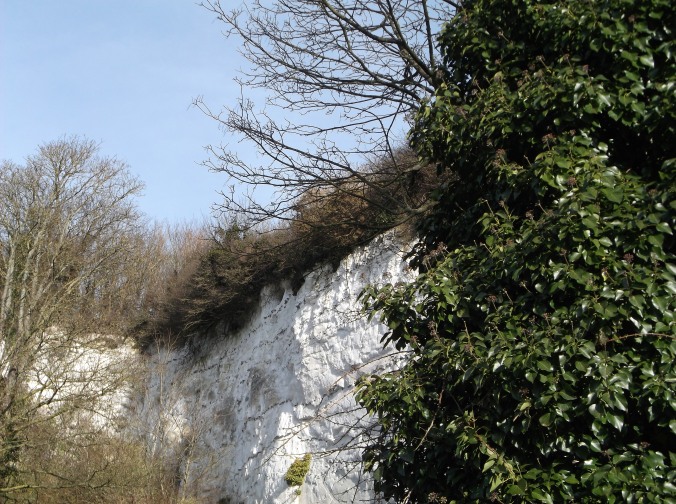 These lovely old chalk cliffs are located at the top of Portsdown Hill in Hampshire, overlooking Portsmouth, The Solent and Hayling Island. On a clear day, you can see the Isle of Wight in the distance.

The cliffs are a long chalk ridge, situated between the sea and the South Downs. They seem very high, probably about 60 feet, and there are many stories about the real and imagined tunnels. There are active military establishments in the area so anything is possible, I suppose.

Apparently, people used to shelter in the tunnels during some of the worst air raids of the second world war, although nobody would have had a good night’s sleep, owing to all the snoring and talking that went on. Not to mention the screaming children and the fact that they kept the lights on all night.

The tunnels were about the size of the old Nissan huts, with bunks down either side, two or three tiers high. People used to hate having to go there and they didn’t like the distinctive dank smell either.

However, it wasn’t all doom and gloom. Believe it or not, entertainment was laid on, from impromptu acting on a makeshift stage, to the regular visits from an accomplished pianist.

It was also reported that the chalk that was excavated to make these tunnels was used to build some of the local roads, the chalk dust casting a white glow over everything for quite a while afterwards.

It just goes to show, that you don’t really know what has been going on in the past, and you can find some interesting stories if you really look…